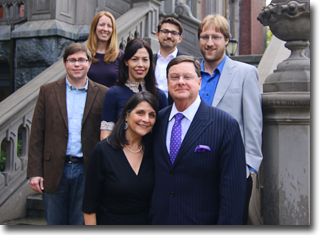 The 2013-14 Synar Fellows with IGS benefactors William Brandt and Patrice Bugelas-Brandt on the steps of South Hall, UC Berkeley.

Major:
Sociology
The Effects of Legal Status on Older Mexican Immigrants in the U.S. and Mexico

Major:
Political Science
Land Use and Local Government in the United States

Major:
History
Mentors:
Rebecca McLennan
From the War on Crime to the Liberal Security State: The New Deal and American Political Legitimacy

"Mechanisms of Inequality: State politics and Small-Dollar Credit Regulation, 1990-2015"
Major:
Ph.D. Candidate, Political Science
Research Interests:
political economy of the U.S.; the historical evolution of consumer credit institutions in the U.S and in comparative perspective; the relationship between credit markets, social welfare programs, & inequality
My dissertation explores the determinants of small-dollar credit regulation across different U.S. states. Social science has long acknowledged that “the poor pay more” for everything from groceries to housing, and credit is no exception....

"States of Disunion: American Marriage and Divorce, 1867–1906"
Major:
Sociology
My dissertation examines the historical relationship between economic development, legal change, and family dynamics in the United States. I combine large and original sources of legal and demographic data from the late 19th century to...

"Well-Behaved Women: The Penalties of Femininity in Politics"
Major:
Political Science
What explains the persistent gap in women’s political representation in the U.S.? As of 2014, women make up only 19% of the United States Congress and 24% of state legislatures, and 80 other nations have a higher percentage of female...

"Who Governs the Federal Reserve Banks? The “Forgotten Minority” and the Politics of  Central Bank Appointments"
Major:
Political Science
I'm working on a dissertation on the Federal Reserve that aims to better understand the process by which the presidents of the twelve regional Reserve Banks are appointed, and the consequences of this process on monetary and regulatory...

"A Constitutional Sublime: Claiming the Founding in Antebellum America"
Major:
History
My dissertation traces the cultivation and mobilization of popular, venerative constitutionalism in the antebellum United States. Its object of study is the production and consequence of this distinctive approach to constitutional meaning...

"Making Modern American Citizenship: Aliens and Citizens in the United States, 1882-1952"
Major:
History
My dissertation asks how and why an ascriptive and often highly federalized late nineteenth- and early twentieth-century citizenship regime evolved into its current, national form. It argues that modern American citizenship – the rights...

"Police and the Citizen-State Relationship: Accountability Mechanisms, Democratic Control, and Equal Access to Law in the United States"

"Sowing Seeds and Knowledge: Development Discourses in the US, China, Taiwan, and the World 1920-1975"

"Out of Step, but in Office: A Text as Data Analysis of Newspaper Ideology, Candidate Coverage, and Democratic Accountability in an Era of Increasing Party Polarization in Congress"
Major:
Political Science

"From Pork Barrels to Policy Pledges: Credit Claiming and the Electoral Connection Then and Now"
Major:
Political Science

"The Effect of Immigration on Local Public Good Provision in the U.S."
Major:
Political Science

"Struggle, Stability, and the State: A Comparative Study of Domestic Worker Movements in The U.S. And Latin America"
Major:
Sociology

"Sanctuary in America: Local Immigration Enforcement and the Power to Police in the Homeland Security Era."
Major:
Sociology

"Military Service, the Military Institution, and the Incorporation of 1st and 2nd Generation Immigrants"
Major:
Sociology and Demography

"Secrets, Lies, and Wishful Thinking: The Importance of Non-Truths for Sociological Theory and Practice"
Major:
Sociology and Demography

"Race, Immigration, and the Transformation of the U.S. Welfare State, 1988-2008"
Major:
Sociology

"From Civil Rights to Multiculturalism"
Major:
Jurisprudence and Social Policy

"The Federalist Society and the Structural Constitution"
Major:
Political Science

"The Politics of Grandfathering in Environmental Law"
Major:
Political Science