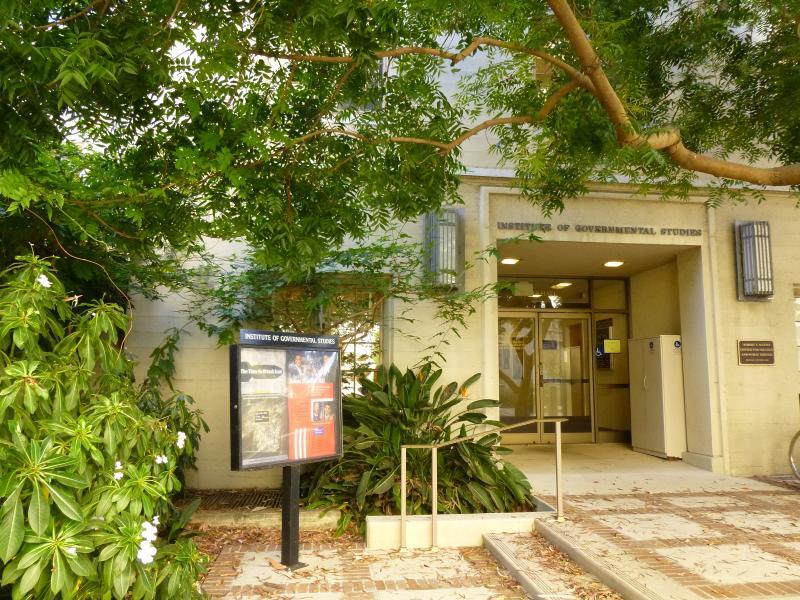 The Institute of Governmental Studies stands at the forefront of research, teaching and service in California and American politics and policy. Interdisciplinary and non-partisan, we foster thoughtful discussions of issues across party lines that focus on solutions – not just problems. We engage faculty, research and political practitioners to make a difference in discourse, and in practice. Our mission is anchored by a belief in the transformational power of public service.

The Institute of Governmental Studies, now entering its second century, began life in 1919 as the Bureau of Public Administration and is one of the oldest organized research units on the Berkeley campus. Its ensuing 100 years of research and service can be divided into several phases, all of which continue to characterize the life and style of the Institute. In its early years, the Institute had strong roots in public administration and California government within the Progressive Movement. Its first director, Samuel C. May, governed from 1921 to 1955 and the Bureau served almost entirely as a specialized library working in conjunction with many campus social science departments and public officials. Having established a firm base as a specialized research collection during the 1920s, the Bureau moved into a second phase of activities in 1930 when the Rockefeller Foundation gave a substantial grant that enabled the Bureau to undertake an enlarged program of research and library development.

The ensuing years brought the successive crises of Depression, World War II, and postwar adjustment. During this time the Bureau played an important role in serving California state and local government in conducting research for policymakers. A large number of graduate students joined the ranks of the Bureau’s professional staff in publishing studies on substantial problems confronting state government and serving as the research arm for the state legislature. In November 1962, the Bureau was renamed the Institute of Governmental Studies to reflect its expanding role as the bridge between the University and the larger community and moved into its current location in Moses Hall from the Doe Library.

Eugene C. Lee served as the IGS Director from 1967 through 1988 and transformed IGS into a leading statewide organization that combined library facilities, research interests, educational goals, and a dedication to public service into a truly interdisciplinary University enterprise. In the late 1980s, Director Nelson W. Polsby broadened the IGS focus to include American national government generally and congressional studies in particular. He built strong ties to American scholars around the world and delighted in building a community of scholars for the campus. In 1999, Bruce E. Cain became director and launched an era of unprecedented entrepreneurship that resulted in bringing over $7M into the Institute’s research coffers. Cain’s tenure lasted for only seven years but in that time he sharpened the Institute’s research focus on issues of institutional design, political reform, and advising governmental bodies that were charged with proposing structural changes such as campaign finance, redistricting, term limits, government by initiative and the like.

Jack Citrin became the seventh director in 2007 and ushered in an era of effective fundraising success and supporting students with research awards, scholarships, and service learning opportunities. In 2009, the Robert T. Matsui Center for Politics and Public Service was established with a $1M directed congressional appropriation. The Matsui Center was tasked with administering internships and programs for undergraduates in Sacramento, Washington DC, and California local governments and to offer public forums for distinguished speakers to interact with students. Under Citrin’s directorship, IGS offered 10 competitive student fellowships that supported the graduate and undergraduate community with funding for research and opportunities for public service leadership training. In 2012, the Anglo-California Foundation donated $1M to establish the Anglo-American Studies Program to advance scholarship and public education about US and British affairs that included a full scholarship for a graduate student that specialized in this area of study. During Citrin’s directorship the Institute raised $5M in new donations that fueled its progress in research and public service. Citrin served as IGS director until 2017.

Lisa Garcia Bedolla assumed the directorship in 2017. Under her leadership IGS launched Democracy Camp, a program designed for Cal undergrads interested in enhancing our democracy through public service, and welcomed the Berkeley Interdisciplinary Migration Initiative to IGS.

In 2019, G. Cristina Mora and Eric Schickler were appointed interim co-directors and in July of 2020 they were appointed to a five-year term as IGS Co-Directors. Read more about their vision for IGS here.

IGS has a history and perspective unique to California, yet a reach and influence that stretch across the nation and around the globe.