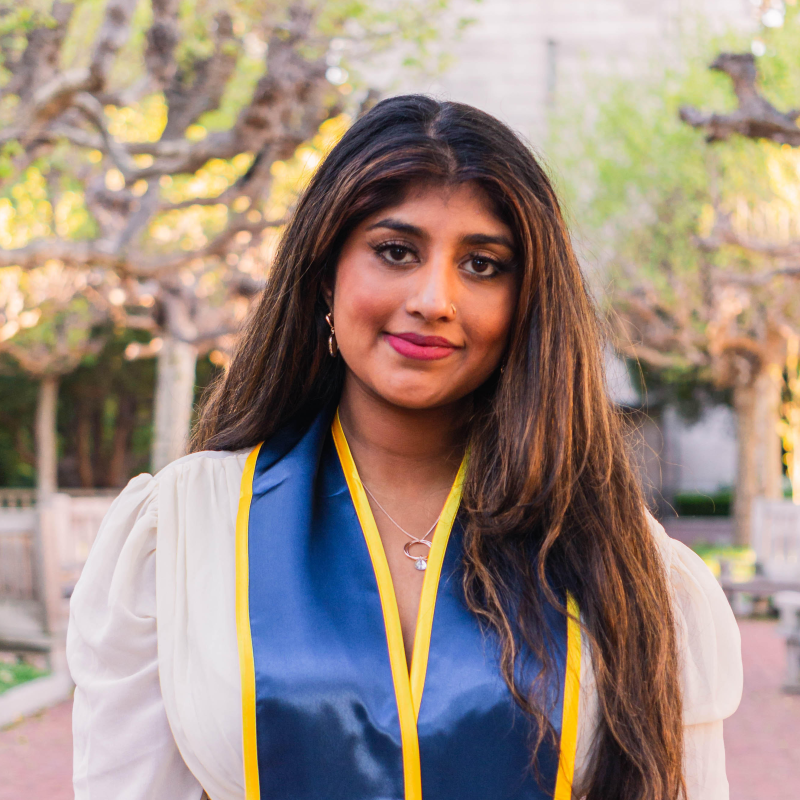 Madhumitha (Madhu) Krishnan, a native of the East Bay, studied Political Science and History at UC Berkeley with a focus on comparative politics and the history of law and government. Madhu wrote her History senior honors thesis on the Madras Torture Commissioner’s Report and the origins of colonial policing in South Asia.

Madhu has extensive research experience, working with professors in the Political Science Department, the Center for Politics and Development, the Center for Gender and Refugee Studies at the UC Hastings School of Law, and most recently with the Indian Police Foundation on policing reforms that better protect the rights of human trafficking survivors. Her writing on organ trafficking has been used in the book, Perspectives on Black Markets, v. 3.

Madhu is a member of Phi Beta Kappa, a Critical Language Scholarship Finalist (in Russian), a Washington Leadership Scholar, and a Cal Leadership Award recipient. In addition to her research experience, Madhu was a public service leader within both her Berkeley and Bay Area communities. She served as an Editor-in-Chief of the Berkeley Political Review, UC Berkeley’s preeminent political journal. She was also a board member and workshop director for the Student Immigration Relief Clinic, where she helped mobilize students to provide aid at naturalization clinics throughout the Bay Area, and co-organized a student trip to volunteer at the Border Rights Project in Tijuana with Al Otro Lado in the midst of President Trump’s “zero tolerance policy.” Here, she drew attention to the underreported quotidian violence taking place at the border.

Madhu is equally passionate about ensuring that immigrant and marginalized communities have fair representation in government and public service. Growing up as a second-generation immigrant, surrounded by multiple friends and loved ones who were undocumented, she wants to fight to make sure the American Dream is accessible to all. She has worked at the office of Civil Rights in the Department of Commerce, helping to organize the First Generations program to increase support and representation for first-generation civil servants. On campus, she founded and is the director of Women in Politics at Berkeley, an organization that aims to provide a space for those marginalized due to gender identity on the UC Berkeley campus.