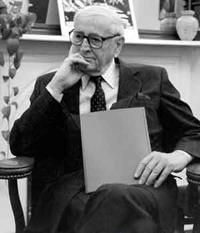 Having earned his bachelor's and master's degrees in psychology from Stanford University and his doctorate from the University of California at Berkeley, John William Gardner launched a truly exceptional career in public service. He ultimately served under six presidents, most prominently as Secretary of Health, Education and Welfare under President Lyndon Baines Johnson between 1965 and 1968.

As Secretary of HEW, Gardner successfully implemented a wide range of Great Society programs targeting the elimination of poverty and racial injustice. He upheld the Civil Rights Act of 1964 by insuring that federal funds were not distributed in a discriminatory way. He launched Medicare to bring quality health care to senior citizens. He presided over the creation of the Corporation for Public Broadcasting. And, following passage of the landmark Elementary and Secondary Education Act of 1965, he redefined the federal government's role in public education by channeling funds to the nation's poorest students.

After resigning as Secretary, Gardner became the first full-time chairman of the National Urban Coalition. In 1970 he founded Common Cause, a prominent citizens' watchdog organization, and served as its first chairman. Gardner resigned his chairmanship in 1977 to serve on the Organizing Committee that created Independent Sector, a philanthropic coalition of over five hundred charitable and philanthropic organizations. Gardner also served as Chairman of the Commission on White House Fellowships and was President Bill Clinton's choice to co-chair the Campaign Finance Reform Commission.

John Gardner authored several books and wrote extensively on public service and leadership. He also served on boards and councils to the Metropolitan Museum of Art, the United States Air Force, Rockefeller University, Shell Oil Company, American Airlines, the Enterprise Foundation, Stanford University, and the Institute of Governmental Studies at UC Berkeley. He received countless awards during his remarkable career, including the Presidential Medal of Freedom, the highest civil honor in the United States.

Gardner's legacy includes a vast array of public service accomplishments. The John Gardner Fellowship Program is honored to be part of that legacy.

A new spotlight exhibit of John W. Gardner provides a glimpse at his life and distinguished career in public service, as well as his time at Stanford as a student, trustee, professor, and mentor.