Modern War in Theory and Practice 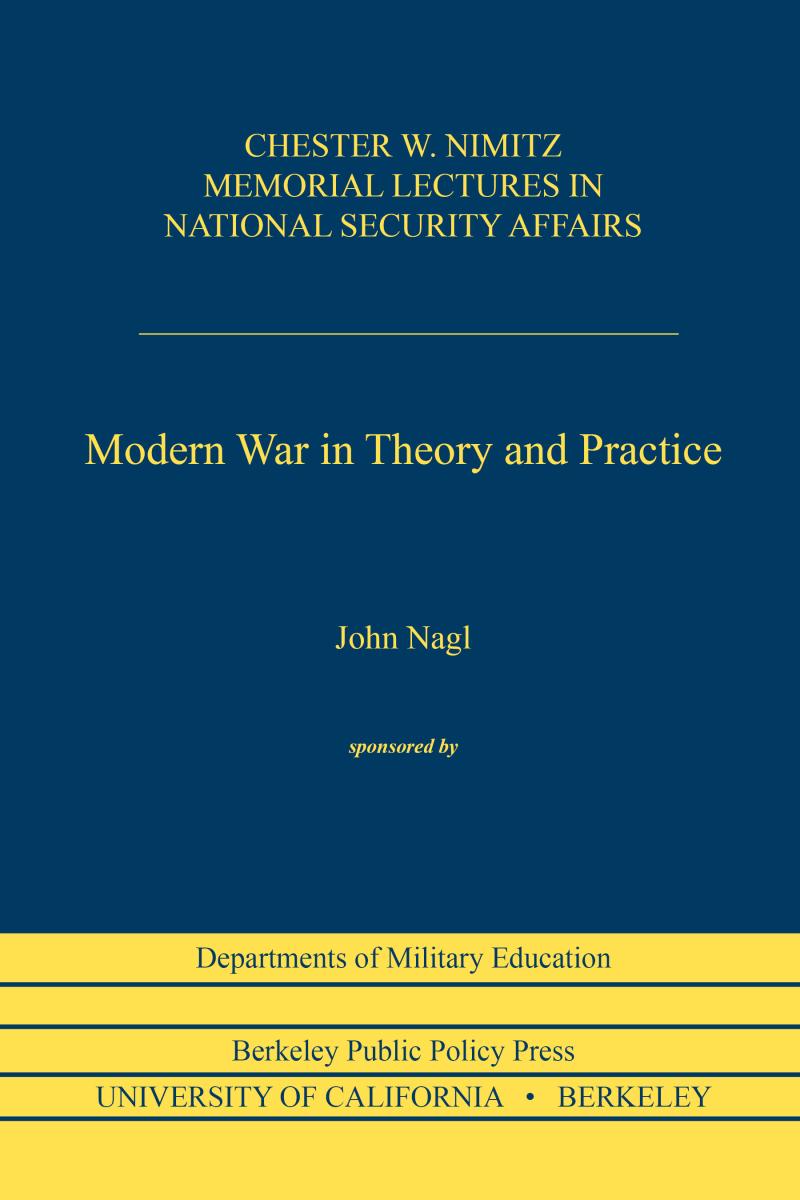 Dr. John Nagl is currently the ninth headmaster of The Haverford School. Prior to his assuming the role of headmaster in 2013, Nagl was the inaugural Minerva Research Professor at the U.S. Naval Academy. Previously, Nagl was the president of the Center for a New American Security in Washington, D.C., and he remains a nonresident senior fellow at CNAS. He was also a member of the Reserve Forces Policy Board for Secretary of Defense Chuck Hagel, [update?] a visiting professor in the War Studies Department at Kings College of London, and a life member of the Council on Foreign Relations and the Veterans of Foreign Wars. Nagl has testified before the Senate Foreign Relations Committee and was appointed by the chairman of the Senate Armed Services Committee to serve on the 2010 Quadrennial Defense Review Independent Panel (the Hadley/Perry Commission).

Nagl was a distinguished graduate of the United States Military Academy Class of 1988 who served as an armor officer in the Army for 20 years. His last military assignment was as commander of the 1st Battalion, 34th Armor at Fort Riley, Kansas training transition teams that embedded with Iraqi and Afghan units. He led a tank platoon in Operation Desert Storm and served as the operations officer of a tank battalion task force in Operation Iraqi Freedom, earning the Combat Action Badge and the Bronze Star medal. Nagl taught national security studies at West Point’s Department of Social Sciences and in Georgetown University’s Security Studies Program and served as a military assistant to two Deputy Secretaries of Defense. He earned his Master of the Military Arts and Sciences Degree from the U.S. Army Command and General Staff College, where he received the George C. Marshall Award as the top graduate and his doctorate from Oxford University as a Rhodes Scholar. He was selected as the Alumnus of the Year of Creighton Preparatory High School in Omaha, Nebraska in 2012.

Nagl is the author of Learning to Eat Soup with a Knife: CounterInsurgency Lessons from Malaya and Vietnam and was on the writing team that produced the U.S. Army/Marine Corps Counter-Insurgency Field Manual. His book Knife Fights: A Memoir of Modern War in Theory and Practice was published by Penguin Press in October 2014. His writings have also been published in the New York Times, the Washington Post, the Wall Street Journal, Foreign Policy, Military Review, Joint Force Quarterly, Armed Forces Journal, and Democracy. He was profiled in the Wall Street Journal and the New York Times Magazine. Nagl has appeared on The News Hour with Jim Lehrer, National Public Radio, ABC News, Al Jazeera, and The Daily Show with Jon Stewart.

Nagl spent a few days at UC Berkeley and delivered two talks and participated in a Q&A session with midshipmen. The focus of his conversation was modern war in theory and practice.