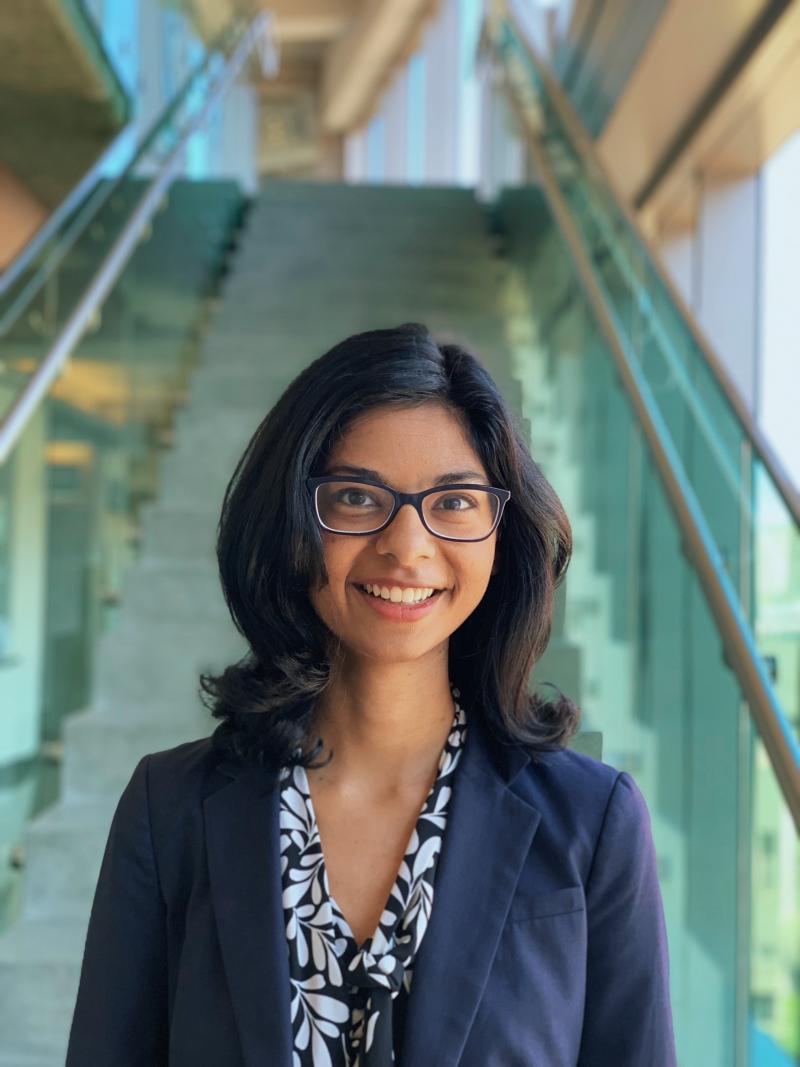 As a UC Berkeley student, Varsha Sarveshwar dedicated herself to fighting for young people — in local politics, state politics, and student government. She aspires to a lifelong career effecting meaningful change in California through politics and policy, and she is excited to begin this career as a 2020-2021 John Gardner Public Service Fellow. As a Fellow, she hopes to work on education equity issues in a local or state elected official’s office.

Varsha’s interest in politics and inequality stems from her childhood. Before she turned 18, her family moved nine times between cities and towns in Orange, Los Angeles, and Ventura Counties. As a result, she knew first-hand that the education she received at a given time depended on where she lived. Later on, Varsha became concerned about other barriers facing young people, including higher tuition and fees at public colleges and universities, student loan debt, lack of affordable housing, and a chronically weak job market.

At UC Berkeley, Varsha turned to politics as a way to advocate for change. She served as the President of Cal Berkeley Democrats, where she planned events with elected officials and connected students to party networks. In 2018, Varsha managed Rigel Robinson’s campaign for Berkeley City Council. The candidate received 56% percent of the vote in Berkeley’s student-supermajority district and became the youngest councilmember in city history. Since then, Varsha became an alternate member of the Alameda County Democratic Central Committee, a delegate to the California Democratic Party convention, and a political staffer on Assemblymember Rob Bonta’s campaign.

Varsha also became a leader in student government. In spring 2019, she was elected External Affairs Vice President of the Associated Students of the University of California, UC Berkeley’s student government. Later that year, she was elected President of the UC Student Association, representing more than 275,000 students. In these roles, Varsha strengthened the relationship between students and the city, co-authored and passed an initiative renewing UC Berkeley students’ free local transit access, co-hosted a hearing of the Assembly Select Committee on Campus Climate on campus, and worked with UC leaders and state lawmakers to address students’ needs in light of the COVID-19 pandemic.

In addition to her extensive political activities, Varsha maintained her focus on academics. She worked on campus as a research apprentice, a political science tutor, and an undergraduate student mentor. She also wrote a senior political science honor thesis that examined the impacts of increased ideological diversity on the California state legislature since 2001.

Varsha graduated from UC Berkeley with a B.A. in Political Science and minors in Public Policy and History in spring 2020. She is a recipient of the 2020 Political Science Departmental Citation, the 2019 Travers Scholarship in Ethics and Politics, the Percy Undergraduate Grant for Public Affairs Research, and the Chancellor’s Award for Public Service.