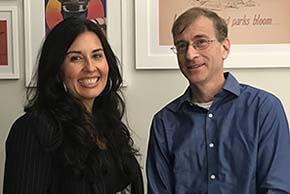 G. Cristina Mora is Associate Professor of Sociology and Chicano/Latino Studies (by courtesy) at the University of California, Berkeley. She completed her B.A. in Sociology at Cal in 2003 and earned her Ph.D. in Sociology from Princeton University. Her research focuses mainly on questions of census racial classification, immigration, and racial politics in the United States and Europe. Her first book, Making Hispanics (2014), provides the first historical account of the rise of the “Hispanic/Latino” panethnic category in the United States. This work, along with related articles, has received wide recognition, including the American Sociological Association’s 2010 Best Dissertation Award and 2018 Early Career Award (SREM). She is currently working on two new book projects funded by the Russell Sage Foundation. The first, California Color Lines: Racial Politics in an Era of Economic Precarity (w. T. Paschel) examines the contradictions of racial politics in the nation’s most diverse and seemingly professive state. The second, Race and the Politics of Trust in an Age of Government Cynicism (w. J. Dowling and M. Rodriguez-Muniz) provides the first mixed methods examination of race and political trust in the U.S. In July 2020 she was appointed Co-Director of IGS along with Eric Schickler.

Eric Schickler is Jeffrey & Ashley McDermott Professor of Political Science at the University of California, Berkeley. He is the author of three books which have won the Richard F. Fenno, Jr. Prize for the best book on legislative politics: Disjointed Pluralism: Institutional Innovation and the Development of the U.S. Congress (2001), Filibuster: Obstruction and Lawmaking in the United States Senate (2006, with Gregory Wawro), and Investigating the President: Congressional Checks on Presidential Power (2016, with Douglas Kriner; also winner of the Richard E. Neustadt Prize for the best book on executive politics).  His book, Racial Realignment: The Transformation of American Liberalism, 1932-1965, was the winner of the Woodrow Wilson Prize for the best book on government, politics or international affairs published in 2016, and is co-winner of the J. David Greenstone Prize for the best book in history and politics from the previous two calendar years. He is also the co-author of Partisan Hearts and Minds, which was published in 2002. He has authored or co-authored articles in the American Political Science Review, American Journal of Political Science, Legislative Studies Quarterly, Comparative Political Studies, Polity, Public Opinion Quarterly, and Social Science History. His research and teaching interests are in the areas of American politics, the U.S. Congress, rational choice theory, American political development, and public opinion. In July 2020 he was appointed Co-Director of IGS along with Cristina Mora.

Event and Communications Coordinator
Ezra received a BA in Studio Arts at Trinity College and studied Visual Arts and Communication Studies at the University of the West Indies in Trinidad and Tobago. In 2015, Ezra pivoted from visual arts to performing arts when he became one of the principal dancers and volunteer social media... END_OF_DOCUMENT_TOKEN_TO_BE_REPLACED

Program Manager
Megan Collins is a higher education administrator and researcher. Prior to joining IGS in 2021, she was the research project manager of The Shift Project at Harvard Kennedy School, a survey-based research project focused on secure scheduling at large U.S. service-sector firms. Before joining... END_OF_DOCUMENT_TOKEN_TO_BE_REPLACED

Mark DiCamillo is director of the Berkeley IGS Poll, a non-partisan survey of California public opinion on matters of politics, public policy and public affairs conducted by the

Dawn Geddes is the Administrative Manager at the Institute of Governmental Studies. After studying English literature with a focus on Britain between the world wars, Dawn designed and managed wardrobe for theater and television, worked as a fiction editor, and produced and managed... END_OF_DOCUMENT_TOKEN_TO_BE_REPLACED

Jordan Gerner is the Government Information Collection and Circulation Specialist at the IGS Library. Jordan manages circulation and processes and catalogs archival materials. He also assists with the Library's local government digitization project. Jordan has a BA in film studies from the... END_OF_DOCUMENT_TOKEN_TO_BE_REPLACED

Kris comes to IGS from the Stanford University Libraries where she was the Government Information Librarian for State, Local and International Documents and managed the Social Sciences Resources Group from 2017-2021. Prior to Stanford, Kris was the... END_OF_DOCUMENT_TOKEN_TO_BE_REPLACED

Luka Marks is a Bay Area native and a recent UC Berkeley Graduate. Luka graduated with a BA in Sociology and a minor in Human Rights Interdisciplinary from Berkeley in 2022. Prior to joining IGS, Luka was working as a research assistant for IGS Co-Director, Cristina Mora, on her research

Robert Toyama is the IGS Library’s part-time cataloger. He is responsible for creating metadata and bibliographic records to make the library’s collections discoverable in ... END_OF_DOCUMENT_TOKEN_TO_BE_REPLACED

Executive Director of IGS, and Director of the Robert T. Matsui Center for Politics & Public Service

Christine Trost is Executive Director of IGS and Director of the Robert T. Matsui Center for Politics and Public Service, a component of IGS that seeks to interest undergraduates in public service through internship programs, public events, and the presence of distinguished visitors on... END_OF_DOCUMENT_TOKEN_TO_BE_REPLACED